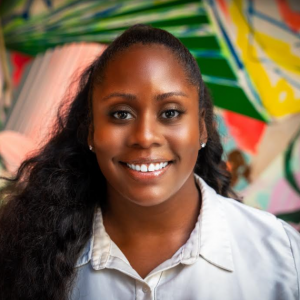 Brittany Ford was named the Executive Director of MAGIC in 2022, overseeing both the BMAGIC and Mo’MAGIC Programs. Previously the Director of the Mo’MAGIC community collaborative she is passionate about making the Fillmore District a safe place with excellent opportunities for everyone. She has been part of the Collective Impact staff team since 2014, and previously served as Magic Zone Middle School Lead, where she managed all aspects of programming for grades 6 to 8; she also took on the role of Finance & Operations Assistant, providing administrative support for the organization. Brittany graduated from California State University, Northridge in 2012 with a B.A. in Journalism, with an emphasis in Public Relations. She has served as a Community Advocate for the Community Youth Center of San Francisco, instructing earthquake preparedness workshops in the Western Addition, and as an Educational Advisor for PACT Inc. Brittany, born and raised in Oakland, enjoys spending her free time with friends and family.

Moira Dumo Rios is a San Francisco native, alumni of Phillip & Sala Burton Academic High School and graduated Summa Cum Laude from Central State University with a Bachelor of Science in Criminal Justice. In her previous roles as BMAGIC’s Program Coordinator and Community Outreach & Program Assistant, Moira assisted with the planning and coordination of BMAGIC’s Literacy is Freedom Book Fair, Back to School Celebration & Backpack Giveaway, Bayview Hunters Point National Night Out, and the production of the bi-annual BMAGIC Resource Guide. As MAGIC’s Associate Director, Moira looks forward to continuing her support and collaboration with all of the organizations, agencies and schools that strengthen and serve Bayview Hunters Point and Fillmore children, youth and families. Kayla Kunze is a native of San Francisco, growing up and having family and friends residing in the Western Addition. She is a proud graduate of City College of San Francisco with an Associate of Science in Administration of Criminal Justice, and currently working to obtain her Bachelor Degree in Criminal Justice. Kayla also interned at the Northern California service league within San Francisco’s Hall Justice providing services to people in jail, their families and friends. She later worked for the Public Defender’s main office at the front desk reception for 3 years. She is excited to be back with the Public Defender’s office working within the Bayview Hunters Point community and support those in need. A son of immigrants from India, his pursuit of justice is rooted in his acute awareness of the ramifications of social inequalities. Despite coming from a farming village, his parents managed to emigrate to America, where they raised Mano on the East Coast.

Mr. Raju completed his undergraduate degree at Columbia University, and holds a Master’s degree in South Asian Studies from U.C. Berkeley, where he also earned his law degree. He worked as a Deputy Public Defender in Contra Costa County for seven years before he was recruited by Jeff Adachi to join the SF Public Defender’s felony unit in 2008. Due to his impressive practice as a felony line attorney, he was promoted to be the Director of Training and then Manager of the Felony Unit.

Mr. Raju is deeply committed to a client-centered approach to defense work. “Our impact is not measured in numbers, but in the people we represent,” he said. “It’s by the mother who can return home to her family. The son who can continue to work to support his family. And to the children of those we defend, who benefit from having an equal opportunity to survive and who might one day use that opportunity to lead.”

The personal interest he takes in his clients’ lives helps fuel him not only to fiercely litigate and win cases, but also to raise his voice against the inequities he and his clients encounter in the criminal justice system. It has earned him the loyalty of his entire Department and the confidence of Mayor London Breed, who appointed him to fill the post in March 2019. As Public Defender, Mano will continue to uphold the office’s reputation not only as a formidable group of lawyers, but also as a catalyst for criminal justice reform.

Emily Goldman is a Public Defender and has been practicing in the Juvenile Court for over 20 years. She
is the manager of the Youth Defender Unit. Emily’s commitment to system involved youth in San
Francisco is rooted in her own experiences growing up in the City. Those early experiences exposed her
to a justice system that often seemed unfair to kids, where young voices were marginalized or ignored
and where economic and racial disparities were rampant. The Youth Defender Unit works diligently and
holistically to overcome those barriers; to keep young people out of juvenile hall and insure that they
are supported within their own communities where each youth’s individualized needs can be addressed
outside of a carceral system.